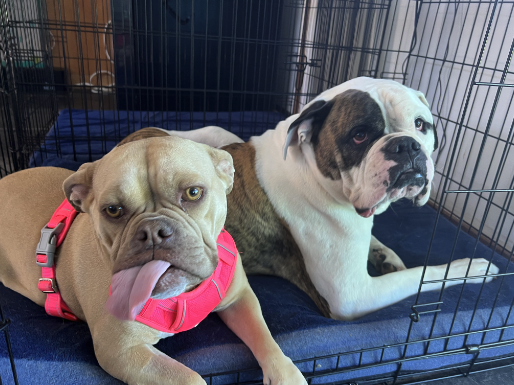 We have been fostering Winston since February and Tulip for a few months, seeing them through various surgeries and getting them ready for their forever homes. I’m happy to announce that they are ready to find their forever homes. Let me tell you a little more about each of these goofballs:

Tulip is a 3 year old bulldog mix. She is sweet, goofy and fun loving. A total couch potato who loves cuddles most of all. She is good with kids and other dogs.

We met Tulip when we got a call from our veterinarian who said she had this incredibly sweet 3 year old bulldog who was going through some health issues and the owner wanted to euthanize her but the vet thought Tulip still has lots of life left to live.

Our vet asked if there was anything we could do to help because she only had 30 minutes before she had to euthanize Tulip. Of course we stepped in and have been fostering ever since.

Tulip had a hip surgery but never got the PT she needed. However, since she’s been with us she’s been doing water therapy and lots of other modalities and she is doing so well. In the future she may need a knee surgery. But for now she is fine. Learn more about Tulip’s back story.

Winston is a 5 year old American Bulldog. This is the most laid back, chill and friendly dog you’ll ever meet. Like Tulip, he’s a couch potato and loves cuddles and short walks.

We could tell from the very start that when he was very young, someone locked him in a crate and wouldn’t let him out. Most of his young life was spent confined. And so his bones didn’t develop correctly during the years that he was in the crate. As a result, Winston has a curvature in his spine, his hips are disjointed, and his knees were fused together.

Since we’ve been fostering Winston he’s had two knee surgeries and he has healed wonderfully and is strong and healthy. In the future he may need another surgery, but nothing for now.

The Perfect Family For Winston & Tulip