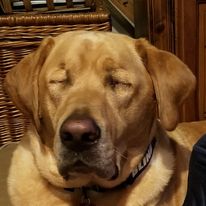 We have had Thor for over 2 years while he has been looking for his forever home.

Thor is a 4-year old Labrador Retriever who weighs in around 124 pounds.

Thor was blind by the time he was two years old due to neglect. He had developed glaucoma in both eyes by the time he came to Lucky Paws Rescue, which caused a great deal of pain. The only way to relieve him of that pain was to remove the eyes.

Thor is very sweet with his foster family. They do not have any other pets, and we feel this would be best for Thor in his new home. Since he cannot see, Thor is not comfortable with dogs he does not know. A large fenced yard would also be great for Thor. Older kids would fine; Thor currently adores a teen-age boy in his foster home.