Learn The Facts About Your Dog's Reverse Sneezing

Learn The Facts About Your Dog’s Reverse Sneezing 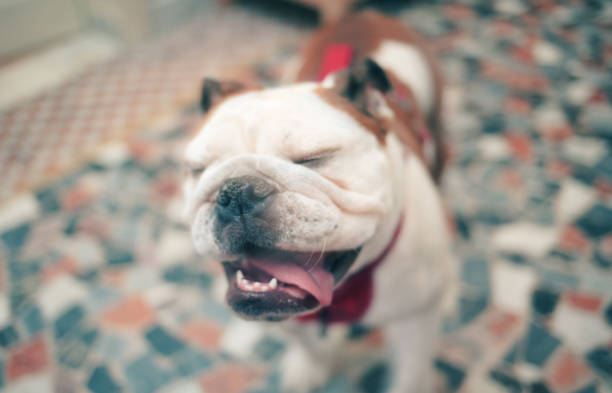 Dogs are weird! They smell strange smells, they get excited by strange things, and they make weird noises. From snoring and barking to all the funny little noises they make when you’ve got a treat in your hands, dogs have a whole charcuterie board of sounds that they can make, but not all of them are good. We all know the fear of hearing that preemptive hacking in the middle of the night or that slimy gag that comes afterward!But, what about reverse sneezing? Have you ever heard your dog doing it?

Keep scrolling to learn more about reverse sneezing in dogs!

All About Reverse Sneezing in Dogs

Let’s start with the basics!

What Is Reverse Sneezing?

Clinically, reverse sneezing is called “paroxysmal respiration”, which is a very fancy way to say that a pup gets a little confused when they need to sneeze. Veterinary doctors Krista Williams and Ernest Ward classify the condition as “rapidly pulling air into the nose” rather than blowing out.

Sometimes dogs reverse sneezing sounds sort of like gagging, or gasping for air through the nose.

If you snort as if snoring, you’ve done a good job of replicating what a reverse sneeze sounds like. Dogs will often have fits of reverse sneezes, during which they repeat their “sneeze” a few times.

Check out this video of a dog having a reverse sneezing episode, courtesy of Village Animal Clinic.

What Causes Reverse Sneezing in Dogs?

We don’t really know why some dogs’ sneezes get inverted and others don’t. All we know is that it is caused by the same triggers as a normal sneeze, such as:

Dogs with long, narrow snouts are more prone to reverse sneezing. Again, we don’t know why this is. What we do know is that longer nasal passages seem to be linked to more frequent bouts of reverse sneezing.

How To Treat Reverse Sneezing in Dogs

While the loud snorting noises that come from reverse sneezes may be alarming, they aren’t dangerous! A reverse sneeze is like a regular sneeze, and no additional intervention is usually needed.

However, if you want to help your pup, it’s okay to offer reassurance. Gentle strokes and reassuring words can help calm a dog down during a reverse sneezing episode, which may help it end more quickly.

If these attacks happen frequently, you may want to call your veterinarian. They may be a sign of an allergy or infection, and your trusty vet will be able to prescribe medicine to treat the underlying cause.

Dogs may sneeze after drinking water if they are excited or drinking too fast.

Your pup’s reverse sneezing episode likely isn’t due to COVID, but it is possible!

Most of the time, a dog will sneeze due to an allergen or irritant. Excessive dust, seasonal pollens, loose grass, and sand are just some of the reasons that your pup may be sneezing. However, if your pup’s sneezing is frequent, it’s time to take them to a veterinarian. While it’s unlikely to be COVID, your pup may be suffering from easily treatable allergies or some other infection.

Reverse sneezes can happen at any time of the day or night.

Whenever your pup encounters a trigger, they’ll sneeze. Much like a tickle in the back of your throat will make you cough, an itch in your pup’s snout will make them sneeze. If sneezing episodes are frequent and disruptive, taking your dog to the vet is the best course of action.

A dog might reverse sneeze after swimming for a few reasons. If your dog gets super excited when they swim, they could be reverse sneezing from over-stimulation. This is particularly common with brachycephalic dogs.

Is Reverse Sneezing in Dogs Dangerous?

Reverse sneezing is not dangerous, nor is it something you should worry too much about.

It is definitely an unsettling sound to hear, no doubt about that! Fortunately, all of that noise is nothing to fret about. Your dog’s reverse sneezes are natural, and their episode will end once they remember to exhale instead of sucking air in. The average sneezing fit will last up to a minute, although some episodes may last longer.

See also  Could Ozone Therapy For Dogs Alleviate Their Pain?

If an episode goes on for what you feel is too long, then you can help your pup through the experience by providing gentle encouragement. Stroking their neck helps calm them, and it may remind them to breathe out.

See also  55 Hypoallergenic Dog Breeds You Might Be Able To Live With If You Have Allergies
Why is My Dog Making a Huffing Sound?

Some dogs make a huffing sound when they reverse sneeze, but huffing on its own can be a symptom of something else. Huffing sounds almost like a cough combined with a choking/gagging noise. It can be alarming but typically resolves after a few huffs and is rarely a sign of something serious.

Some reasons your dog could be making a huffing sound include:
-Exercise intolerance or over-exertion
-Allergies or environmental irritants
-Excitement
-Eating or drinking too quickly

Why is My Dog Reverse Sneezing So Much?

If your dog is frequently sneezing, it’s time to visit the vet!

While many of the causes are minor, there can be some serious conditions causing your pup’s sneezing. One of these is congestive heart failure, which requires prompt treatment, so consult with your vet!

Did you learn something about reverse sneezing? We hope so!

Can Reverse Sneezing Kill a Dog?

In some rare cases, reverse sneezing can be a sign of a serious underlying condition. If your dog reverse sneezes often, consult with your veterinarian.

Jerky - Made in USA