Osito was the only surviving member of his five brothers and sisters. When he moved in with Haley, his foster mother, she had to introduce him slowly to her other pets.

As Haley’s cats spent more time with Osito, they grew interested in him. They would even climb into Osito’s playpen to cuddle and play with him. And the more Osito surrounded himself with Haley’s cats, the more cat-like things he started doing: playful pouncing, kneading on his blanket, climbing on the scratching post, and playing with cat toys.

That was when Haley realized that Osito thinks he’s a cat!

Osito is very much a dog. However, because he was raised by cats, he became more cat-like over time.

Cat Dog Hybrids Are A Hoax

Now, imagine a cat dog hybrid. Certain hybrids of species already exist, such as a liger or a mule, but a cat and dog hybrid is entirely a hoax. Cats and dogs are too distinct from one another.

So, does that mean that cats and dogs can mate? Since these two species belong to different classes, Felidae and Canidae, it’s unlikely they would ever make a dog cat hybrid.

If you’re interested in having a dog with cat-like tendencies, you may be happy to learn that certain dog breeds have feline personalities.

Here, I’m sharing several dog breeds that could be considered cat-like. Do all of these dog breeds look exactly like cats? Not necessarily, but many of the following breeds have adopted cat-like mannerisms or have similar personality traits.

Similar to cats, Basenjis are quiet, confident hunters. They’re sneaky and a bit stubborn as well. Prominently known for being “barkless,” the Basenji is a very quiet pup, and sometimes difficult to train.

See also  White Pugs: Learn Why They Are Rare

Greyhounds are quiet, sweet, and enjoy lots of lazy time like a cat. They love nothing more than to cuddle and curl up in a ball on the couch or the floor. When they do run outside or around the house though, they’re pretty speedy.

Chow chows are a loyal breed. They’re easy to train and constantly clean themselves, just like a cat. 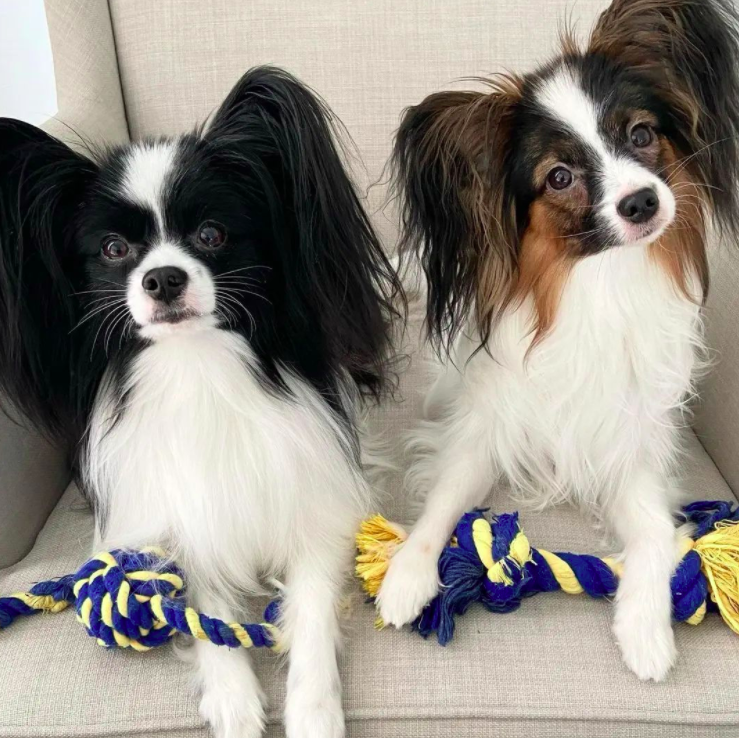 The Papillon loves to cuddle. They enjoy lazing around and are curious little creatures as long as a couch is nearby.

Manchester terriers are cat-like because they’re about the same size. And funny enough, they’re known to be mouse hunters. Sounds pretty cat-like to me!

6. Shiba Inu – this dog looks like a cat dog hybrid!

Shiba Inus used to be hunters. And just like cats, they’re graceful creatures that are incredibly easy to train.

Afghan hounds are a dignified breed and have many cat-like, elegant features. They’re slender, tall, and excel at maintaining their hygiene.

Whippets are speedy during playtime, but they also love a good lazy moment. They love to cuddle and get along well with cats and other pets. And similar to Basenjis, they don’t bark often.

Similar to hairless cats, an American Hairless Terrier will either be completely bald or have short hair that barely sheds. They’re curious, friendly, and loving dogs that love to cuddle and need minimal exercise.

Norwegian Elkhounds are very cat-like because they love to cuddle and get carried. No matter the time of day, these dogs enjoy curling up and lazing around.

Though Corgis have a short stature, they often act like cats. They love to eat, play, and cuddle. They’re also quite curious.

Much like cats, Pomeranians can be tough and stubborn. They’re fluffy and resemble a cat more than some of the other dogs on this list.

The Cavalier King Charles Spaniel is loving and sweet. Similar to a Norwegian Elkhound, they love to curl up and relax most days.

Vizslas can be pretty attached to their human owners. They’re affectionate and love attention. Vizslas are active, wise creatures, so be sure to play with them often.

The Japanese Chin craves companionship. They’re loyal, doting, and friendly to others. However, they like to wander on occasion.

How To Introduce Dogs & Cats

When Haley first introduced Osito to her other pets, she grew a bit worried. Fortunately, Osito grew comfortable around her cats and even started adopting their mannerisms!

As we know, dogs and cats are different creatures because they’re in separate animal classes. Therefore, introducing them to each other can be overwhelming.

Are you worried about introducing a dog to your cats in the same house for the first time? Here, I’m sharing tips for introducing dogs to cats.

Not every dog gets along with a cat. Each introduction will be a unique experience, which you’ll need to keep in mind if you’re planning on exposing a dog to a cat.

Slow and steady introductions are often the best way to get dogs accustomed to cats, and vice versa. To achieve a slow introduction, focus on the desensitization method, which gradually exposes the creatures to one another.

See also  Fall In Love with the Black & White Pitbull

Initially, you may need to separate the dog from the cat for a while by placing them in separate rooms and designating times when they can see each other. Over time, the hope is that your dog will become more used to the cat’s presence and vice versa.

If you learn that your dogs and cats cannot share a common space, you’ll have to keep them separate in the home. Ensuring your animals’ safety is of the utmost importance.

Observe the body language of both animals to determine if they can handle being together. Depending on the environment, however, these interactions will take time.

If you notice any of the above warning signs, separating the animals for a while may be ideal. You don’t want your dog seeing your cat as their prey or your cat feeling displeased toward your dog.

After all, body language serves as an important aspect of the interaction between both animals. You want both animals to feel relaxed and calm around each other.

To ensure the introduction runs smoothly, you may have to intervene for safety purposes. Ideally, dogs and cats shouldn’t chase each other or try to attack, especially if they’re just getting to know each other. And when you’re not watching the animals, keep them apart until they grow accustomed to each other.

Animals with good behavior shouldn’t have issues with new pets. However, you’ll never know until a few introductions. So be patient and give it time. And who knows? Before long, your dog may start acting like a cat!

It WOULD be really cool if there was a real cat dog hybrid. That’s why those hoaxes keep going around the internet. People WANT to believe it’s true.

But until gene editing tools become really sophisticated you’ll have to settle with dogs that look like cats or dogs that act like cats, like our hero in the video above Osito.

If you ever wonder which species is better here is some proof that might clear it up for you.