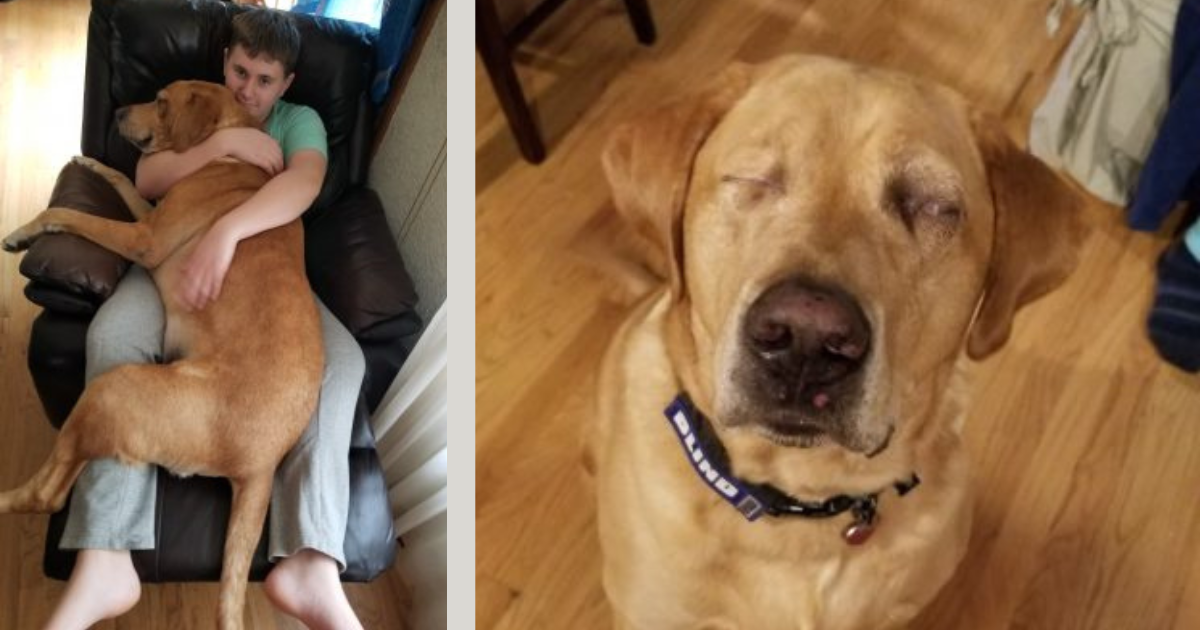 Thor was surrendered to us at the young age of two. His owner dumped him off at the rescue and said he was getting a divorce and couldn’t take the dog.
Both eyes were completely clouded, and it was obvious that Thor was blind. As a young puppy, he had cataracts, but no further treatment had taken place, resulting in glaucoma. Glaucoma can be very painful, so took Thor into the vet and he was on eye drops and pain management but then had to make the hard decision to have his eyes removed. Unfortunately, there was nothing else we could do for Thor’s eyes at that point, and removing them was best for him.
Thor is a very large yellow lab as he weighs about 130 pounds and is about 4.5 years old. He’s a sweet boy and he’d like a home with no other pets or small kids—being blind puts him at a disadvantage, and we’d like his world to be as simple as possible with all the attention just for him! Sometimes meeting new people in his house can be a bit scary but he recovers easily.
In his previous home, where Thor had lived all his life, he was friendly with other dogs, cats, and people–but that was the only home he’d known, where he felt secure, and the home where he’d gone blind over time. Moving from his home to an unfamiliar place with new people, new dogs, and a new floor plan proved to be scary for Thor, and of course, being blind only intensifies that. Now, He just can not handle living in a home with another dog.
Being blind, he needed security in his new territory, so he quickly attached himself to his foster mom and her son. Thor thinks that he is a lap dog and his favorite person is the teenage boy in the foster home. He loves to sunbathe, swim, and carry around the biggest stick he can find. Even though he is blind Thor is a typical Lab.
If you think you might the one for this big sweetheart, please fill out Lucky Paws Rescue of Washington application here: http://form.jotform.us/form/50488470409157
Tacoma, WA/Surrounding Areas