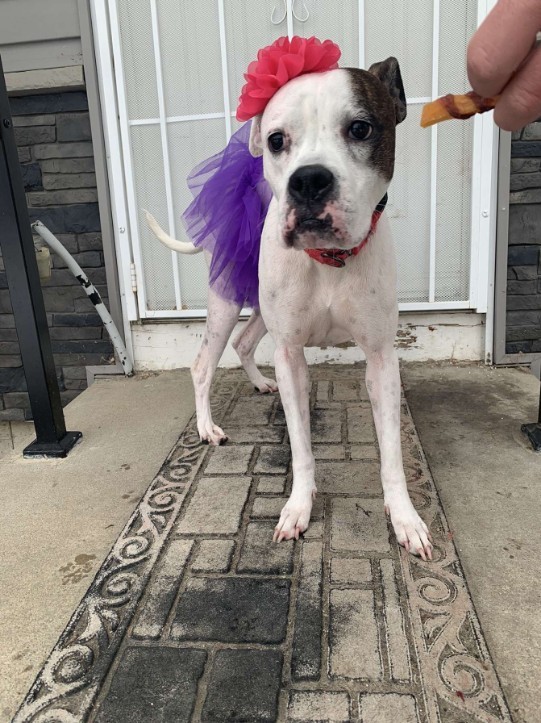 Savannah is a white Boxer mix, about six-ish years old, who was found tied up outside of a Dog Shelter in Texas.  Sitting on ‘death row’, with just hours left to live, Savannah was tagged by DMK Rehoming to come to Denver to find her ‘furever’ home.  Savannah has struggled physically since she arrived in Denver a year ago, suffering from severe allergies that caused a horrible itchy rash all over her body.  It’s taken a while, but her allergies are pretty much under control with an allergy shot every couple of months and a few soothing baths a month.  Savannah did find someone who said he wanted to adopt her a few months after he lost his 15 year old dog.  However, he returned her within the 2 week trial period, he decided he wasn’t ready to “replace” his dog that had died.  Savannah LOVES people, especially kids.  She gets so excited when her favorite pre-teens and teenagers come home, she rears up like a pony and pounds the floor over and over again.  On the flip side, Savannah DOES NOT like other dogs, so she needs to be an only dog.  Savannah is potty trained and crate trained, she finds security in her crate “room” and loves making a donut shaped nest to cuddle in.  Her most favorite treat is duck wrapped sweet potatoes, and when it’s time to eat her can dog food, talk about uber-excited!  She bounces all over the kitchen until she gets her food.  Savannah is definitely an indoor dog, especially since she is allergic to almost everything plant based.  She likes to go out to do her ‘business’ and come back in to hang out on the couch with her people.  Being very short haired, Savannah tends to get cold in the winter, so she loves her hoodies.  When she’s asked if she wants to get her hoodie on, she jumps up on the couch and fully cooperates with getting dressed.   For adoption events she likes to get decked out in her fancy outfits, she does like a splash of color.  Savannah is goofy, affectionate, and wants to be somebody’s ‘ride and die’ companion for life.  Despite being abandoned twice, she’s still willing to give humans a chance.  Who will give Savannah a chance?