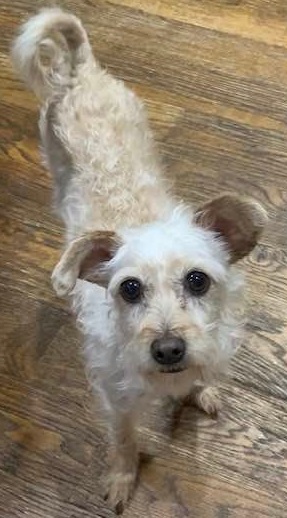 We rescued Minnie from a shelter almost 2 years ago.  She had likely been abused, she had DEFINITELY
been SEVERELY neglected and starved.  She was in awful shape, filthy and SO scared.
She was baring her teeth and barking and growling and lunging and snapping
and snarling.  She was very uncomfortable whenever we got anywhere close to her, slowly and with a LOT of patience, she
allowed Lisa, the President of Pooch Savers, to interact with her, but it was baby steps.

Lisa started by simply sitting by Minnie’s crate.  Not talking.  Not making eye contact, just being there, Lisa
did that for a day or so then she opened the crate door and still didn’t talk or
make eye contact or make any attempts to touch Minnie.  Over the course of about a week, Lisa repeated
these interactions multiple times/day, and trust began to build, Minnie showed signs of softening.

Lisa was able to finally touch Minnie and, in fact, Minnie VERY much enjoyed affection and attention
and this continues to this day.  Minnie follows Lisa around everywhere and LOVES to be held, she sits in Lisa’s lap and gives kisses,
she acts just like a happy, well adjusted, normal dog.  But, Minnie does not act that way with Lisa’s
husband, or with anyone else.

Even after extensive professional training, Minnie remains a one person dog, to everybody else,
she is the same dog she was in the beginning, baring her teeth and barking and growling and lunging and snapping and snarling.  Even
with Lisa – when it comes to Minnie’s  food, Minnie is VERY resource protective and will exhibit those same behaviors if Lisa
or anyone gets near her crate when she’s eating.  Other than that, Minnie is intelligent,
active, faithful and is the sweetest, most loving and docile dog.  She gets along with other dogs (she especially
likes puppies), and she’s fine with cats too.

Her  ideal, home would be a one person home with no other  animals,  but,  she
can successfully live in a home with more,  than one person,  (no kids!) with the understanding,  that  she
will  bond strongly with one person,  in the home and  that’s it.  She also,  ideally would be the
only pet so she can get the affection and attention that she craves.  S

he’s crate trained and loves to go for car rides.  She’s fully vetted and healthy.  She does have a mild case of tracheal collapse.
No medical intervention has been or should be needed except keeping her at a healthy weight and keeping her from becoming over
excited.  She is truly a good dog, but, she’s had a very rough life and it’s caused her to initially distrust people.