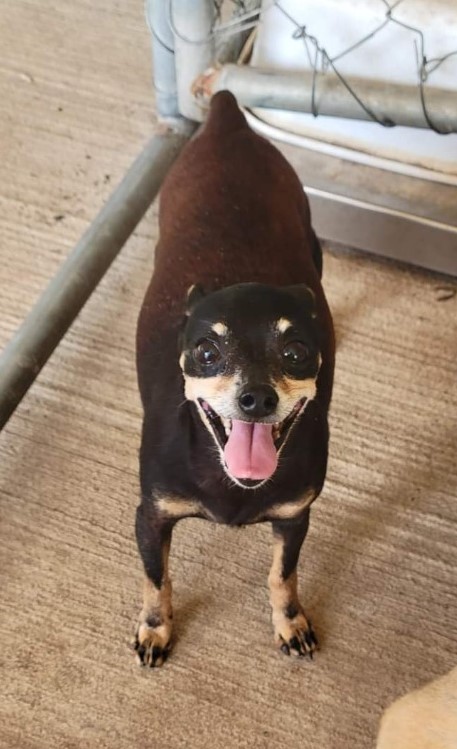 This is Man Man a 9 year old Min Pin mix. I am 8 pounds. I was owned by a woman who was said to have dementia or mental illness of some kind. After being evicted they left all their animals in the home. Another rescue removed all the dogs but in the process Man Man ran off and would not come back. After a few days the woman snuck back into the home at which time so did Man Man. But when she left, she left him in there, with no electricity, food or water in the simmer heat. The house was not livable, covered in roaches and fleas and the smell of urine would take your breath away.

His nails were so over grown it was hard to see how he could walk. But he was so happy to be helped and was taken back to the rescue to start his rehab. He is now neutered, microchipped, hw negative and ready to find a lap to hold down. Man Man is as active or sedentary as you want to be. He loves to burrow under covers when he sleeps and is just a very sweet an loving little guy who doesn’t meet a stranger. He barks at small children but once he knows they wont hurt him he actually asks for pets. He did have to have most of his teeth pulled due to no dental care in his early years but he does still eat hard or soft food. Please fill out the application at sgerinc.com to get started.

Man Man should wear a belly band inside until he knows his boundaries for going potty outside. He was never allowed outside so he doesn’t know any better but is getting there. He uses a doggy door here quite well!