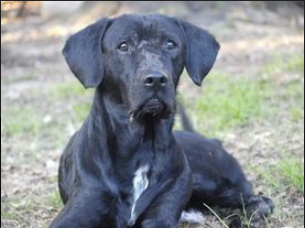 Meet Nipper! Nipper is an amazing overcomer. He is full of life and orneriness. He is just around 2 years old. SGER is looking for a FUREVER family for our Sweet Boy. We love him so much…he deserves a loving home where he can get lots of interactions.

He is special needs as he cannot move like a normal dog, he is mobile and can use the doggy door. He plays with the other dogs – holding his own. He doesn’t walk with a leash. He has so much love to give and is looking for a FUREVER family to spend his 2nd chance with.

Nipper’s Story: People all over Facebook followed Nipper’s journey. In January, SGER got the call about Nipper. He was a lifeless pup laying at home in Fitzgerald, Ga waiting to die. He would not eat or drink or let anyone come near him. He had an open fracture rear leg break and both front elbows were dislocated.

From what we can tell her had been hit by a car and mauled by dogs. Not sure in what order. He was feral and covered in mange. I was told numerous times that in the beginning, he should be put down. (He still refused food after 3 days) He eventually ate. And we have slowly made headway and surgery after surgery everyone has followed him.

We have t-shirts for Nipper and he has a huge following of supporters watching him love life again. Nipper is a tripod on the rear. He has two fused front elbows due to his injuries prior to us getting him. He needs long term joint care to keep him mobile.

He is on Summit Joint Performance Trial…if it works, it will run about $50 per month. He is also on Dasaquin chewable joint supplements that run about $30 per month. He has to stay on Simparica Trio for his skin condition which is about $25 per month. Nipper is a special needs pup and his adoption fee is waived.