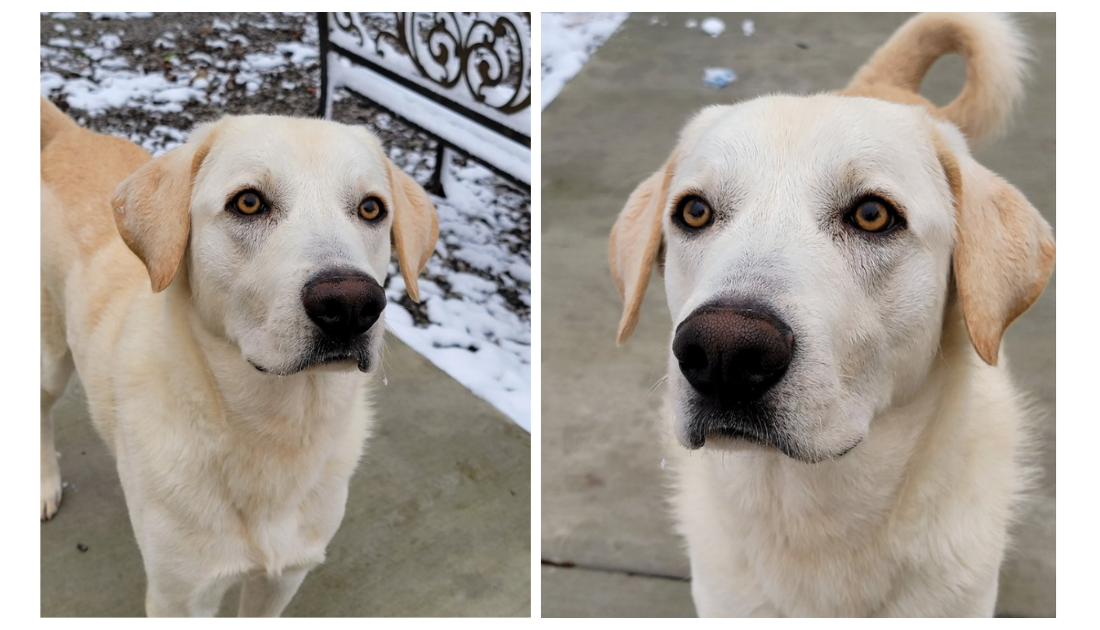 Meet Smuca Luca! Smuca Luca was named by a young boy whose family helped to get Luca to safety by calling and transporting him to our rescue! Smuca Luca at first is a little skeptical of people and his surroundings but once he starts getting into a routine he quickly gets with the program and becomes part of you.

He is a gorgeous blonde with beautiful eyes, a tall dog that weighed in at 70 pounds, but he should be 90 plus a tail that curls on his back. He came to us extremely underweight and needing to be fully medically vetted and somehow he is heartworm negative.

We believe Luca is a Lab/ Great Pyrenees mix and young somewhere between 1-2 years old! After he becomes acclimated to a new environment, he is a big ole ham and large clumsy baby! He loves to play but doesn’t realize how tall he really is, or when he stands on his hind legs or jumps up and towers over you (5’1)! We are working on getting him to not jump up and he is doing better at it.

When he was discovered, he did fine around children that may have come innately, but while playing he could easily knock one down. Luca is the perfect dog for a family used to large dogs! He also tends to be a bit mouthy during play with no bad intention. He does know how to calm and enjoys laying in the sun and just chilling or inside. He is crate trained and housebroken now and we are still working on some obedience, but he will definitely require a strong handler.

Luca does do well around other dogs once properly introduced and he enjoys playing with them. He would benefit in a home where there is another big dog or he would enjoy his people as an only dog. He is affectionate and enjoys hugs, pets, and love! He is also protective and will watch over his family and home.

Smuca Luca will be a marvelous dog with a family used to big working breeds and have the willingness to work with him to get him to be all he can be. To adopt this gorgeous boy Luca please go complete our online pre-adoption application